The birth of the Spencer Public Library began when several ladies from the Spencer Woman's club were organized into the Ladies Library Association of Spencer in 1883. They were entrusted with the care, use and growth of a circulating library in the community. The Woman's Christian Temperance Union contributed a number of books to begin the library's first collection.
In 1892, after several moves, the city levied its first tax for maintenance and support of the library with the Ladies Library Association still in charge of daily operation.
Grant monies of $10,000.00 were received from Andrew Carnegie for the erection of a new library building in 1902. The conditions set forth by the grant were that the city was to provide a suitable site and provide maintenance. The city complied with the first condition in 1903 and the site at East 3rd Street was chosen. The corner stone was in place on July 6, 1904.
Miss Caroline V. Langworthy, a graduate of the Illinois Library School, was appointed the first librarian and assumed her duties on January 1, 1905. The Carnegie Library began operation in March of 1905 with 3,500 volumes. Circulation in 1904 was 8,227 and leaped to 12,526 in 1905. A children's department was opened in 1948 on the north side of the basement in the Carnegie Library.
On November 5, 1968, voters approved a bond issue, which raised $225,000.00 for a new building. The remainder was supplied from an $81,614.00 LSCA grant from the Federal government awarded in 1969. February 28, 1970, 65 years after its conception, the Carnegie Library was torn down to make room for the present library structure. A grand opening was held in Sept. 1971. The new building allowed for an open and flexible floor plan and handicapped access to all areas.
During the 1970s, the library experienced tremendous growth in circulation, services and programs. This trend has continued to the present.
In 1984, the north wall of windows in the adult dept. was enclosed and expanded by 396 square feet. This allowed for more shelving and better temperature control. In 1989, the library received an interior remodel, which included new carpet, re-upholstering chairs, new tables and desk lamination, and paint on the concrete walls. These cosmetic changes brought new color and warmth to the library. It also allowed for rearrangement of collections, shelving units, and seating areas while also improving traffic flow and openness. The remodeling increased the number of patrons and use of materials.
On January 18, 1987, a half-frozen kitten was recovered from the book drop and nursed back to health. After discussion with the board, mayor, city attorney, and city council, the kitten was adopted as the official library cat and named Dewey Readmore Books. Since that humble beginning, Dewey has generated more PR, advertising, good will, and international press than one could imagine. He has made the name "Spencer Public Library" known throughout the U.S. and has pen pals in Canada, England, and Japan. Postcards sporting his image generate dollars for the Friends Group at a steady rate. Many visitors came to the library from other states just to see the cat. Dewey died of cancer on November 29, 2006 at age 19.
In 1994, the library introduced an automation system, which allowed circulation, cataloging, and the card catalog to be computer generated. Staff duties and the public's use of the library were permanently altered by this change.
In 1996, thanks to a generous donation from John Watts, the library began work on an expansion project. This project added 1,500 square feet to the front of the building, allowed for two new restrooms, an ICN conference room, a private study/A V cubicle, a new reading area, and a new colorful profile to the exterior of the library. Construction began in June 1997 and was completed by July 1998. At the same time, four more public access computer stations were added and Internet access for the public on 6 additional stations. In 2004, the lobby was remodeled with ceramic tile on the walls and floor greatly improving the first impression visitors receive upon entry. In 2005, new carpeting was installed in the Round Room, all perimeter sidewalks were replaced, and 2 wireless Internet access points made available to the public.
Technology, such as the ICN, the Internet, additional public computers, laptops, CD's, MP3s and online databases, has allowed Spencer residents to have access to information all over the world and has forever changed the boundaries and services offered by the library. New opportunities for information delivery, outreach programs, services, and unique programming continue to develop as we plan for the future of Spencer Public Library. 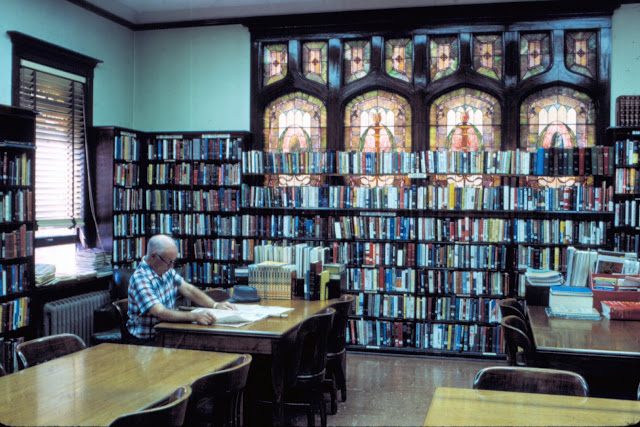 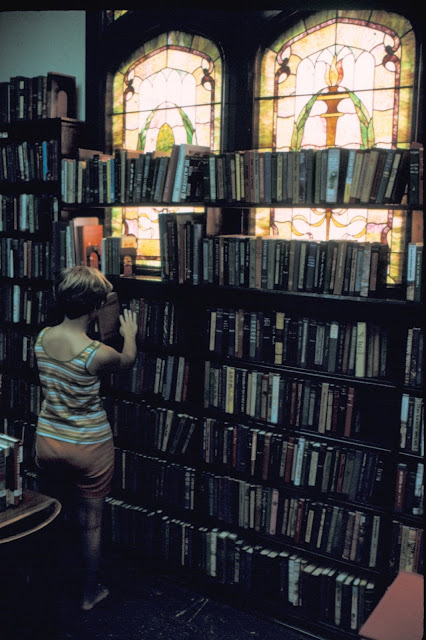 Pictures of the original Carnegie library.