Dewey Readmore Books was the resident cat at Spencer Public Library. He was put in the book dropreturn one cold January night in 1988. When the staff found him the next morning, they decided to adopt him. After the library's board of trustees and the city council approved, the kitten was neutered, and given the proper vaccinations. A contest was held to pick a name, and Dewey Readmore Books was officially added to the staff. The staff cared for Dewey and donated their pop cans to feed the kitty. Patrons and friends from as far away as New York donated money for Dewey's food.
Dewey generated lots of publicity for the library. He was featured in the local paper, Country Magazine, Cat Fancy Magazine, on the Sioux City television stations, in books, and on postcards. He was a video star in "Puss in Books", a documentary about library cats. Of course, Dewey was already the star of the library. Many people came in just to see him. Dewey even had his own job description. 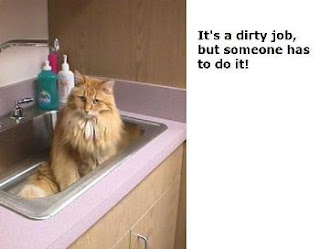 Check out Dewey as a supervisor of our staff:

Dewey passed away on November 29, 2006 due to complications from a stomach tumor. He had become very frail because of hyperthyroid disease for which he was receiving medication. He died in the arms of the library director, Vicki Myron. He had celebrated his 19th birthday eleven days before he died. Although Dewey is gone, he will be remembered by thousands of people whom he cheered by simply being a loving presence in the library. Dewey will never be replaced. The library won't be the same without him.
Dewey's memory lives on. He is an official member of the Library Cat Society and was a contributing author on several occasions using Vicki Myron, the library director, as his scribe. Vicki has written an adult book about her life with Dewey at Spencer Public Library, published September 24th, 2008.
Vicki has retired from the library, but you can contact her at:

HOURS
BY APPOINTMENT ONLY