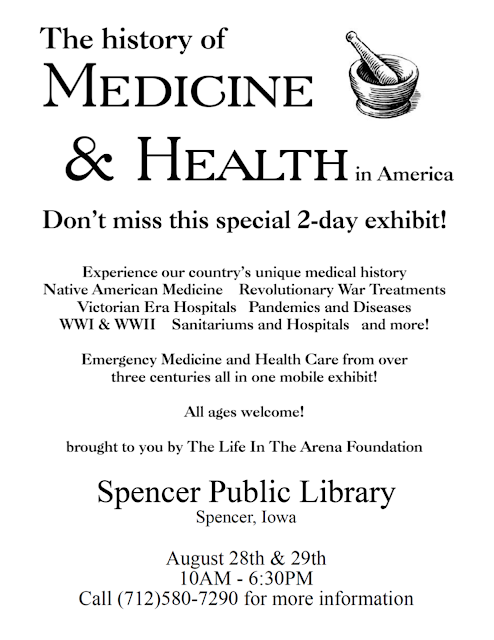 The Life In The Arena Educational Mobile Museum takes you on a portion of America’s journey through the development of emergency medical care and disaster medical response.
​
The museum is not just a static display but rather includes presentations for all ages on the innovations that changed medical response throughout the last two centuries and some of this country’s most challenging medical events.  The exhibit pieces as well as the presentations and stories are a testament to the resilience and determination of those who have stood in the arena faithfully keeping their oath while saving lives and seeking better instruments, policies, protocols and procedures.

What kind of history is displayed in the museum?
​
This museum is extensive and features the history and developments in health care and emergency medicine in the United States.  Displays range from mid to late 1700's with artifacts such as blood-letting tools to the 19th Century and all its developments including the earliest EKG, patient transport items, hospital equipment, bizarre artifacts from sanitariums and yes, the macabre world of snake oil salesmen and fake doctors.
Jump into the 20th Century as the world experienced the Spanish Flu Pandemic and then the world wars that brought with them not only challenges but strange new ways of treating patients.
The museum now features a Titanic display featuring items not only from the ship, but pieces that introduce you to the doctors aboard the ill-fated ocean-liner and the triage that followed the Titanic's sinking aboard the rescue ship the RMS Carpathia.
As of early spring 2019, the museum featured over 2000 items and artifacts.