On the 2nd Day of Christmas 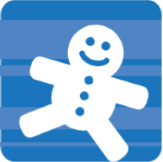 Gingerbread dates from the 15th century, and figural biscuit-making was practiced in the 16th century. The first documented instance of figure-shaped gingerbread biscuits was at the court of Elizabeth I of England. She had the gingerbread figures made and presented in the likeness of some of her important guests.


https://en.wikipedia.org/wiki/Gingerbread_man
The 12 Days of Christmas are the days from Dec. 25 until the evening of the 5th January - also known as Twelfth Night. The 12 Days have been celebrated in Europe since before the Middle Ages.

The turtle dove is sacred to the Greek goddess Demeter. Perhaps because it forms strong pair bonds, turtle doves have become emblems of devoted love. In Renaissance Europe, the European turtle dove was envisaged as the devoted partner of the Phoenix. The turtle dove is featured in a number of folk songs about love and loss. Turtle doves also are featured in the song, "The Twelve Days of Christmas", as the gift "my true love gives to me" on the second day of Christmas. If added cumulatively, by the end of the song, the recipient has been given 22.
-abridged from https://en.wikipedia.org/wiki/European_turtle_dove