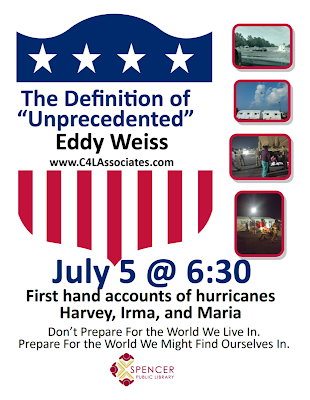 It’s been a great June at Spencer Public Library and we are looking forward to a fun July.  There is still time to sign-up for the Adult Summer Reading Program, Libraries Rock!  Anytime you read a book, attend an Adult Program, and/or write a book review, you get a chance to win fabulous prizes.
We will be reading the 1998 non-fiction biographical book, The Orchid Thief, by American Journalist Susan Orlean . The Orchid Thief is based on Orlean's investigation of the 1994 arrest of John Laroche  in south Florida for poaching rare orchids in the Fakahatchee Strand State Preserve. The 2002 dramatic comedy, Adaptation, starring Nicolas Cage, Meryl Streep, and Chris Cooper does not follow the book as most book to movie adaptations do. The film is a satire on the process of the book to movie adaptation, in which Orlean's book is turned into a formulaic Hollywood thriller.
July 2 is Makey Makey Music Night. Fun for all ages! Explore circuits and conductivity while making music. This is a family friendly event where you can make a piano out of bananas or drums out of spoons! Get ready to have fun and be creative.
C4L & Associates will be at the library to discuss first-hand accounts of hurricane Harvey. The 2017 Hurricane Season brought with it a new perspective for responders, especially a band of 5 from Iowa that deployed to the edge of the Gulf in the wake of Hurricane Harvey. Now, the focus of a new documentary and a soon-to-be-released book, this adventure will be told by three of that team at the Library. This is the story of the very worst of storms and the very best of humanity, challenging us all to become a part of something bigger than ourselves.
Join us for a wonderful program, Our Neighbors the Amish, presented by Don and Dianne Kramer of Dyersville, Iowa. Come learn about the beliefs and lifestyle of a community of people whose religious practices are often mystifying and whose way of life is much different than our own. Amish treats available!
Stop by to learn about the Rock and Roll Hall of Fame Association with the program Iowa Rocks! Cindy Stanbro and Connie Valens-Anderson will talk about the Iowa Rock ‘n Roll Music Association, new and past Iowa Rock ‘n Roll Hall of Fame inductees, and current museum renovations.
We will be watching the 2007 French Auto-biographical musical, La Vie En Rose, starring Mario Cotillard and Gerard Depardieu. The film is about the French singer Edith Piaf, who, much like our own Marilyn Monroe, rose to stardom and quickly burned out because of her troubled life.
Sadly, at the end of July we will be saying goodbye to the Adult Summer Reading Program. But, before we say farewell, those who finished the program (read three books) will get free food from McCreary’s Catering at our Final Carnival on August 3.  Singer Songwriter Chad Elliott will entertain at the Carnival and we will have games for adults. Remember to return all prize entry slips, and turn-in all book reviews by July 31 before 5:00 PM. The final prize drawing for the Kindle Fire will be after the Carnival.