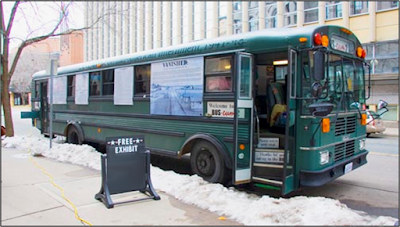 TRACES BUS-uem Presents: At Home in the Heartland

TRACES will bring its mobile exhibit At Home in the Heartland: How We Got to be ‘Us’ to Spencer on Friday, November 20th from 9:00 am to 1:00 pm. It is housed in a retrofitted school bus, called the BUS-eum. “The Iowa that existed as little as 35 years ago is gone. Sweeping, long-term changes in the region’s agriculture, economy, technology, politics and its ethnic, age or other demographics have altered the ways we live. In the process we have lost old
treasures even as we have gained new possibilities. All this can be examined, together.  The exhibit curator holds that ‘While the failure to transfer practical information hobbles young people’s later job skills and economic performance, the failure to transfer cultural information erodes their social skills. Cultural competency is understanding how we became who we are, how we changed over time—or not—and how humans change at all. It informs us how we behave as individuals, how we live together and how we govern ourselves.’ ”

Social Contexts of Family History
Join Professor Michael Luick-Thrams at 10:00 am on November 20th as he explores family history in the context of Spencer, Clay County and the surrounding areas.  Discover the family history included in the new book to be
published by TRACES Center for History and Culture.  See pictures collected, and hear stories of the pioneers as they came to settle in Clay County.

A Continent Divided: An “Inside-Outsider” Reflects on Europe’s Refugee Crisis
Iowa native Michael Luick-Thrams spends part of the year in Dresden, teaching and writing and on November 20th from 12:00 pm to 1:00 pm, he’ll be speaking about the refugee crisis now dividing Europe, in conjunction with
showing the BUS-eum. This past spring and summer, along with millions of increasingly surprised Germans,
Luick-Thrams watched as more and more refugees fleeing war, poverty and also ecological disaster arrived in Europe, seeking a safe haven. He will be taking time out from speaking about regional and social history to share his
experiences of and perspectives on the refugee crisis that will change Germany—indeed all of Europe—forever.