John Steinbeck was an American writer best known for Of Mice and Men and The Grapes of Wrath. He received the Nobel Prize for Literature in 1962. J. Edgar Hoover was on a fight against communism.
He was convinced that Steinbeck was a full-blown Red communist. Steinbeck was a proud patriot who tried to give a voice to the powerless and defenseless. J. Edgar had nothing to charge Steinbeck with, though. Instead, J. Edgar used his power to encourage the IRS to audit Steinbeck’s taxes every single year of his life to be politically annoying.
The FBI denied all allegations that they were harassing Steinbeck let alone have a full fledged investigation going on about him. Steinbeck was heavily tied to communists through the League of American Writers and the United States Communist Party’s John Reed Club for writers. He was in contact with leftist authors, journalists, and labor unions. He was a close associate of playwrite Arthur Miller, too.

JRR Tolkien considered Sam Gamgee the "chief hero" of The Lord of the Rings. If you’re unfamiliar with The Lord of the Rings, it is a world famous story of the struggle of a group of people to destroy a powerful ring before it results in the resurrection of the evil Sauron. The “main character” of the story is Frodo Baggins, a hobbit (a person with large hairy feet and short stature).
Frodo is tasked with taking the ring to Mordor, the place where it can be destroyed. Frodo is joined by his gardener, Samwise Gamgee. Throughout the course of the story, it might seem obvious that the main character and carrier of the ring is the story’s hero. J. R. R. Tolkien, the author, saw things differently though. Tolkien claimed that Sam was the true hero of the story.
To be fair, the claim holds some merit. Sam did beat a man eating giant spider in single combat, storm a tower full of orcs on his own, resist the temptation of the ring, and carry Frodo up the side of a volcano essentially carrying the fate of the world on his back- all while suffering from starvation and dehydration. So it seems to stand to reason.

Author Joseph Conrad was working on a book called Suspense: A Napoleonic Novel in 1925 when he died leaving it unfinished. It was published uncompleted after his death. The great irony is that his readers will be forever in suspense with the story, never able to complete it, as if it’s title were a self-fulfilling prophecy.
Conrad was a fairly prolific writer, contributing his works to the fields of novels, novellas, short stories, and essays. Though somewhat influenced by romanticism, his work tends more towards modernist literature. He is particularly known for his anti-heroes.
Interestingly, though his writings are in English, Conrad did not always speak English fluently and always spoke with a Polish accent. Many of Conrad’s books have been made into movies including Victory, Lord Jim, The Secret Agent, An Outcast of the Islands, The Rover, The Shadow Line, The Duel, Heart of Darkness, Nostromo, and Almayer's Folly. 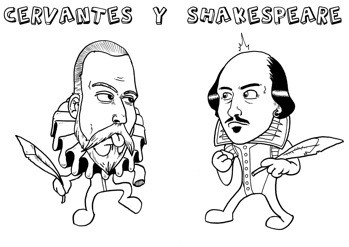 William Shakespeare and Miguel de Cervantes died on the same date, but not the same day.

April 23 is regarded as World Book Day, marking the anniversary of the deaths of two literary giants, English playwright William Shakespeare and Spanish novelist Miguel de Cervantes. Both men died on April 23, 1616, but they did not really die on the same day. Cervantes’ death date is based on the modern Gregorian calendar, while Shakespeare’s is based on the old Julian calendar that was still being used in England at the time. If he used the Gregorian calendar, Shakespeare would have died in May.

William Wordsworth also died on April 23, though it was many years later in 1850.

Stan Lee of Marvel Comics gave several of his characters alliterative names so they’d be easier to remember.

In 2004, a French author wrote a book without using a single verb.

Le Train de Nulle Part (The Train from Nowhere) is a book that takes place on a train. It features flowery prose and, in lieu of any action, is limited to a narrator describing and criticizing the passengers on the train.

The author, under the pseudonym Michel Thaler, wrote this book as part of a crusade against verbs. He says that the verb is an "invader, dictator and usurper of our literature". He even staged a funeral, to ceremonially "bury" the verb.

"The verb is like a weed in a field of flowers. You have to get rid of it to allow the flowers to grow and flourish. Take away the verbs and the language speaks for itself".

Somehow, 300 people attended Thaler's mock funeral for the verb at Sorbonne University in Paris, France. Imagine sending invitations for a mock funeral without using verbs!
Stephen King started an impromptu book signing at an Alice Springs book store in Australia. The problem was that the employees didn’t realize who he was and that he was signing his own books. They mistook him for a vandal. Later, the employees said King was nice and charming. They said they’d have baked him a cake had they known he was coming to their book store.
Many of Stephen King’s novels have been adapted to films. He’s written Carrie, The Shining, and Misery. Most of the books he signed at the book store are being donated to charity. King’s representative in Australia said he wasn’t aware King was even in the country at the time of the signing. The manager of the book store said that it isn’t uncommon for authors to come into the store and see if their work is on the shelves. It is really embarrassing if they don’t have the author’s work.

Anybody who’s ever read E.B. White’s classic novel “Charlotte’s Web” knows it’s a touching story. The friendship between the pig (Wilbur) and the spider (Charlotte) has stood the test of time, being enjoyed by multiple generations over the last sixty years. E.B. White, a self-professed animal lover, said he wrote the children’s story to amuse himself.
It all started in 1933 when White and his wife bought a farm, and it was his experiences there that inspired him to write the book. He once observed a spider spinning its web night after night above the pig trough, and then he spied her egg sack one morning. He cut it down when he moved away to New York, watched the spiders hatch, and then finished writing the story.
Apparently this experience touched the author profoundly. White himself recorded the audio book for “Charlotte’s Web,” and it took him SEVENTEEN takes to get through the part about Charlotte’s death. Why? He became so emotional each time he read it that his voice would break and he’d begin to cry.


To put it bluntly, Lisbeth Salander could probably kick your butt (if she were real). The unforgettable character was played by Mara Rooney in the film “The Girl with the Dragon Tattoo.”
The film is based on the highly acclaimed novel of the same name by Swedish author Stiegg Larsson. Surely such a dynamic character was inspired by someone, right? In interviews, Larsson states that Lisbeth is based on what he imagines Pippi Longstocking would be like as an adult.
HUH? Well, Pippi did take on a 250 pound pirate bare-handed. She could also lift her horse over her head and was a loner who was content to live with her pet monkey. Okay, I get it now, Mr. Larsson.
Interesting fact: in the movie, the words “V. Kulla” are displayed on Salander’s door. V. Kulla is an abbreviation for Villa Villekulla, the name of Pippi Longstocking’s house.