Adult Programming in May


The Book To Movie Club will be reading, and then watching, 2001: A Space Odyssey written by Arthur C. Clarke and directed by Stanley Kubrick. Unlike most, this book and movie were developed concurrently and the movie was released before the book. With science fiction themes such as; the perils of technology and nuclear war, evolution, space exploration, and artificial intelligence it is the perfect movie to watch in June during our science themed adult Summer Reading Program. So read the book in May and then watch the movie in June. 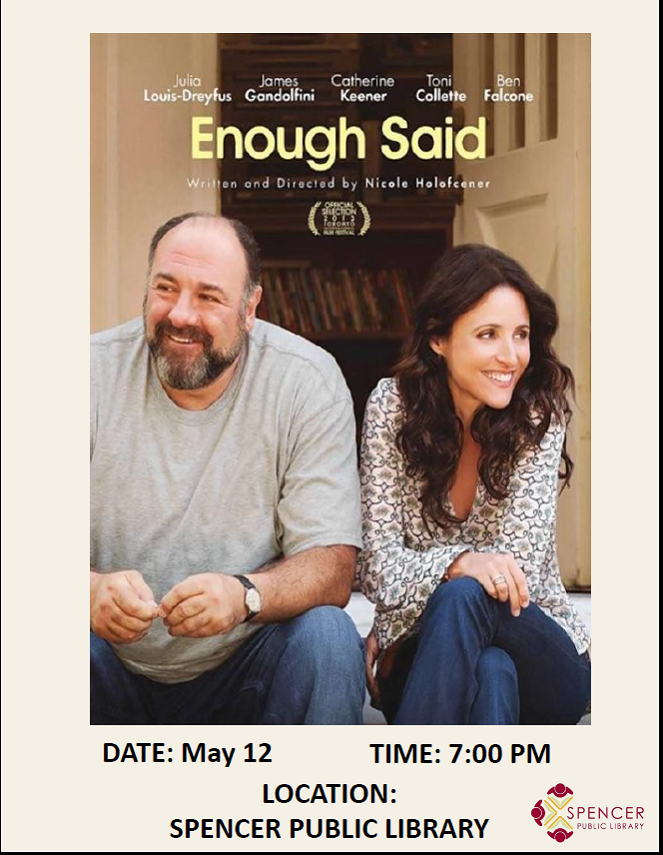 The library will show the movie “Enough Said” starring Julia Louis-Dreyfus and James Gandolfini. “Enough Said” is a romantic comedy about two divorcees reentering the dating scene. Funny and insightful, “Enough Said” won numerous awards and is said to be one of the top five best movies of 2013 and it will be at the library for free– with snacks!
It may not feel like it, but summer is just around the corner and we will be registering for the Adult Summer Reading program on May 31 from 10-4. Decorate a cookie and see all the wonderful programs and prizes we have planned for this year’s science themed program, “Literary Elements”.  For Summer Reading Programs we will be making seed bombs, learning about rain gardens, participating in making mozzarella cheese, watching great movies like “2001: A Space Odyssey”, making ice-cream, and having an end of the program science party. Be sure to sign-up not only for the great programs, but for the weekly prize drawing and a chance to win a Kindle Fire!