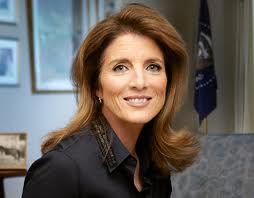 Caroline Kennedy has been named the 2013 honorary chair of National Library Week (April 14-20, 2013). During National Library Week and throughout the month of April, libraries of all types hold special events to highlight the unique role libraries play in American society and encourage the public to use their reesources, including computers, books, e-books, homework help, resume writing, job searches, accurate financial information, adult education, support for immigrants, and more.

As honorary chair, Kennedy will appear in public service announcements promoting National Library Week. The ads will be placed in magazines and online throughout the spring. An advocate of reading, literacy, and libraries, Kennedy has written or edited ten bestselling books on American history, politics, and poetry. **(Spencer Public Library has several of these titles and can acquire the rest through interlibrary loan.)** Her latest book, Poems to Learn by Heart--due to be published in March 2013 with original illustrations by award-winning artist Jon J Muth--is a companion to her New York Times number-one bestselling collection A Family of Poems.

In December 2011, Kennedy spoke at the Carnegie Corporation of New York/New York Times I Love My Librarian Award ceremony in New York City. In that speech, she said that many librarians she has met are "professionals who are excited about their changing role in a changing world--who are dedicated to serving others, who respect scholarship, and who understand that you are our guides on a lifelong journey of intellectual collaboration and collaborative composition...Your work is truly life changing."